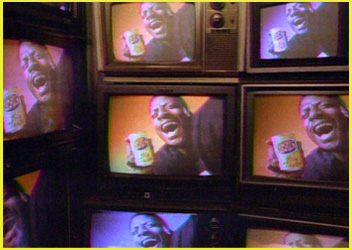 Witty, slick, sexy and sarcastic, shameless and in your face, THE AD THE THE EGO takes on advertising on its own terms. By re-editing and restructuring thousands of contemporary and classic television commercials with insights by noted media critics, this rapid fire, multi-layered documentary exposes the destructive power of a mass media system out of control.

THE AD THE THE EGO traces the development of advertising from its descriptive 19th century origins through todays high-tech manipulation of powerful symbols and imagery. The average American is exposed to over 1500 ads every day. But, like the air we breathe, we pay little attention to it. By using the style, techniques and images of modern advertising, the film skillfully mirrors the neural network of ads that connect us as a society, educating us about who we are and who we should be.

THE AD THE THE EGO goes beyond deconstructing individual advertisements to reveal the economic and political dimensions of living in an advertising infused environment. In our "new world order" of diminishing resources and devastating pollution, this film makes the critical connections between the rise of consumerism, environmental degradation and our blind commitment to economic growth at any cost. It forcefully demonstrates the link between our debased public discourse and a media culture that defines freedom as consumer choice rather than democratic participation.

THE AD THE THE EGO doesnt just diagnose the symptoms of our late 20th century commercial disease, but more importantly, it de-mystifies the consumer culture which underlies our affliction and makes us all so susceptible. Complete with original soundtrack by media pirates NEGATIVLAND, this humorous and entertaining documentary is an irreverent, up to the minute analysis of the complex role advertising plays in our lives and its impact on our global future. Viewer discretion is advised: you will never look at an ad the same way again.

For more detailed information, reviews, the Theatrical Film Trailer, and other facinating material, visit THE AD THE THE EGO website at www.TheAdandtheEgo.com.